With cryptocurrency moving into the mainstream, many small business owners want to know if it’s time to accept it as a form of payment.

Major retailers like Starbucks, Nordstrom, and Whole Foods already accept Bitcoin. Gamers on Microsoft and Twitch conduct transactions in cryptocurrency daily. PayPal has even set up a way for its users to purchase cryptocurrency and may soon allow cryptocurrency payments.

In other words, it’s becoming easier and easier for the average American shopper to access the form of payment.

For those of you unfamiliar with cryptocurrency, let’s talk about what it is first.

According to Investopedia, “A cryptocurrency is a digital or virtual currency that is secured by cryptography, which makes it nearly impossible to counterfeit or double-spend…A defining feature of cryptocurrencies is that they are generally not issued by any central authority, rendering them theoretically immune to government interference or manipulation.”

There are several types of cryptocurrency, and they’re not linked. Think of them as different countries with different currencies. You can’t spend Japanese Yen in America any more than you can spend an American dollar in Italy.

In fact, there are thousands of cryptocurrencies out there. 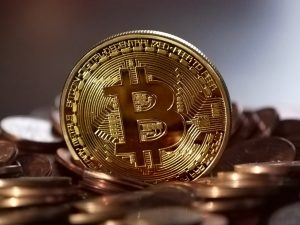 Bitcoin is the one you’ve most likely heard about; it’s been around the longest.

There are also Altcoins out there, which means an alternative to Bitcoin. These include Litecoin, Namecoin, and Dogecoin. They run much like Bitcoin with a limited supply.

Some Altcoins have their own systems and protocols, such as Ethereum, Ripple, and Omni. (Source: SoFi)

Things to Consider Before You Accept Cryptocurrency

The very first thing you must consider when accepting cryptocurrency is that it’s unlike any other currency you have received in the past.

For one thing, it’s not considered legal tender in a majority of the countries around the world, and specifically not in the United States.

The Library of Congress examined more than 130 countries worldwide regarding cryptocurrencies and found most of them don’t accept them as legal tender. As a result, most governments issue a warning about cryptocurrencies, saying they’re highly volatile and unregulated.

You Can’t Deposit Cryptocurrency in the Bank

Cryptocurrency exists separately from the other currency that you accept. To use cryptocurrency like cash, you need to exchange it for cash.

According to American Express, “Many enterprises today accept more than a dozen payment mechanisms in-store and online (cash, checks, wire transfers/EFTs, multiple credit and debit cards, and a variety of digital mobile wallet and/or payment apps) but none of these share many attributes with Blockchain-based cryptocurrencies such as Bitcoin, Ethereum, Dogecoin, Litecoin, and the rest.”

Because cryptocurrency is not legal tender, the IRS does not treat cryptocurrency like cash revenue. Instead, the agency treats cryptocurrency as property. So any transaction you do will be “barter” which is the more technical term for trading property (not cash).

That means if you accept cryptocurrency, you need to report the value of it the moment it is received and pay income tax as normal. And, if your cryptocurrency gains value before you use it or sell it, you must report that change in value as a capital gain.

There is no capital gains exemption for cryptocurrencies.

What’s more, if you use a third party to handle all of your digital currency transactions, you may receive a 1099-K form at the end of the year.

One of the scariest things about cryptocurrency for a small business is that it is highly volatile.

When accepting the U.S. dollar as payment, what you see is what you get. Inflation and other economic issues have relatively little impact on the value of that dollar. The dollar is even very stable compared to other currencies. That means if you receive $1 today, that dollar is still worth $1 two to three months from now in terms of purchasing power.

You can predict your revenue.

Do you know how much you should be charging each day?

Bitcoin, along with other forms of cryptocurrency, is subject to massive swings in value. If you do accept cryptocurrency, you have the opportunity for significant gains but also substantial losses.

No Legal Recourse in Case of Loss

Perhaps the best example of this is the San Francisco man who made headlines in 2020. The man forgot the password to his 7,002 Bitcoins worth millions of dollars on today’s market. (Source: BBC)

No one’s there to help him find the password so he can access those coins. If he loses them or cannot access them, no one is there to protect him.

The FDIC insures banks, so if someone steals your money, you’ll get some or all of it back. Police officers and the FBI are there to catch someone if they rob you. The SEC is there to make sure stock markets play fair and reduce fraud.

Currently, there’s no agency like that when it comes to Bitcoin and other cryptocurrencies.

Reasons Why You Should Consider Accepting Cryptocurrency

With all of these issues, it’s easy to say cryptocurrency isn’t for you. However, there are some instances where cryptocurrency may be suitable for your business.

How Old is Your Clientele?

These generations are more likely to adopt cryptocurrency, and so they’ll be more willing to spend it and pay with it as well.

If you tend to serve an older clientele, say anyone over 40, then cryptocurrency may not be the best choice for your company.

Where is Your Clientele?

Some small businesses find cryptocurrency is a better answer because they deal with clients in many different countries. While national governments do not recognize it, cryptocurrency is something that is recognized by users internationally.

Many times, banks place a hold on payments from other countries. Cryptocurrency arrives in your digital wallet instantly. What’s more, you don’t have to worry about currency exchange when accepting cryptocurrency.

Cryptocurrency is something to consider if you have several international clients.

Established businesses with a large emergency fund may consider cryptocurrency as a method of diversifying cash.

Cryptocurrency is an uncertain store of value. However, as a volatile asset, it might be able an alternative investment that is worth considering for an allocation of your investment assets.

Bitcoin supporters argue that cryptocurrency is a hedge against inflation, and that’s the best reason to invest in it. However, recent market trends have proven that that may not be true.

Given Bitcoin’s short history, it’s tough to determine if it’s genuinely a hedge against inflation like proponents claim. A better claim is not that it is counter to inflation, but rather it is independent of inflation.

Each small business will have to weigh the good with the bad when deciding whether to accept cryptocurrencies as payment.

Remember that cryptocurrencies can be highly volatile, with immense highs and lows. Cryptocurrency is not a legal form of tender in a majority of countries around the world.

In America, cryptocurrency is taxed as an investment and as income. What’s more, there is no legal recourse if something goes wrong with your cryptocurrency because there’s no central bank overseeing the currency.

For small businesses that run month-to-month or even quarter-to-quarter, cryptocurrency can be a considerable risk. More stable companies may find cryptocurrency as a way to diversify funds or possibly hedge against inflation.

Make your decisions wisely based on your customers’ habits and your risk tolerance.

NOTE: Towne Advisory Services is not an investment firm, so we do not offer advice regarding investments or taxes. The information provided in this article is designed to be educational and may not be pertinent to your specific situation. As always, do your research, form your plans and then ask your investment and tax professionals.

Other Posts:
Cost Cutting Measures to Reduce Spending on Accounting
Business Valuation and Finance Terms You Should Know But Feel Dumb Asking About
How to Spot Dangerous Entrepreneurship Advice

Want to join the discussion?
Feel free to contribute!

Get In Touch File Upload

The information contained in this website is for general information purposes only. While we endeavor to keep the information up to date and correct, we make no representations or warranties of any kind, express or implied, about the completeness, accuracy, reliability, suitability, or availability with respect to the website, or the information, products, services, or related graphics contained on the website for any purpose. Any reliance placed on such information is done at your own risk.